Today I am off to the Cuero y Salado Wildlife Refuge! This is one of the oldest protected areas in Honduras. It is also the site where the Vacaro Brothers Company began operations in mainland Honduras. The area is an estuary formed by the Cuero y Salado rivers. Most of this wildlife refuge is quite inaccessible. The main entrance to the refuge is via a funky train that provides for a unique train ride in Honduras. To get there, I must first get to the town of “La Union”. This village is in the municipality of El Porvenir, which is adjacent to La Ceiba. 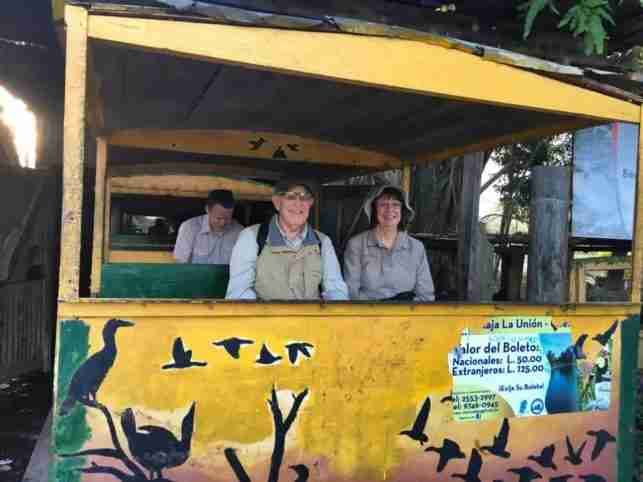 Ready for our visit to Cuero y Salado!

La Union dates to the glorious days when Honduras was part of the Banana Republic. This is where the main railroad track between La Ceiba and Tela had a small spool that led off to the village of Salado Barra. In the old days, Salado Barra was a major hub to produce coconut copra. The Standard Fruit Company gave up this land concession many years ago. But you can still the influence of the banana company in the village. La Union then, refers to the railroad junction that existed there. A community grew around this area and today it is a hub for cattle ranching.

If you plan on visiting Cuero y Salado, you must first get to La Union and then take the unique train ride. To get there, take the CA13 highway west, towards Tela and San Pedro Sula. At approximately km 167 you will find a detour towards La Union. If you took a public bus towards Tela, get off here, just before the bridge over the Perla River. There are always moto taxis, also known as tuk tuks that will take you to La Union, which is a couple of kilometers from the junction. The train departs sharply at 7 am and again at 9 am. So, make sure you are there on time! 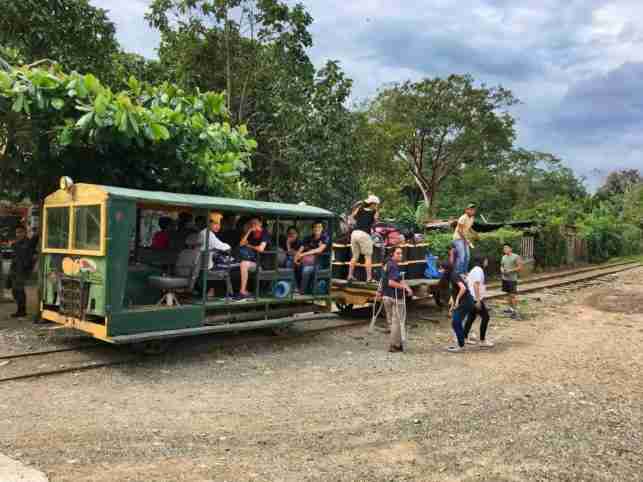 The Banana Train departing from La Union towards Salado Barra.

The 40-minute ride is an treat in itself, and if you are a birdwatcher, make sure you bring your binoculars. You are bound to see different bird species as you enter the refuge. Upon arrival to Salado Barra, which is the gateway to Cuero y Salado you will almost immediately see the Visitors Center at Cuero y Salado Wildlife Refuge. Here you will pay your entrance fee and arrange for your tour. Next to the visitor’s center is a small dock where you will board your boat for the tour of the estuaries and the canal.

Most visitors only see some of the nearby mangrove canals. The wildlife you will see is varied, and in addition to great birdwatching opportunities, you will probably see alligators, turtles and most likely monkeys. There are two species of monkeys that life in the refuge. One of these are the howler monkeys. These creatures try hard to make intimidating howls. It is easy to understand why they are called howler monkeys. They literally howl! In their effort to intimidate visitors, they howl loud, which of course, will help your guide find them! 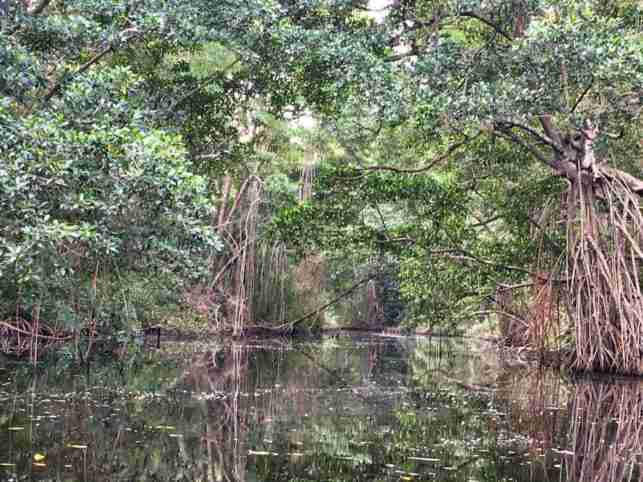 The mangroves at Cuero y Salado are majestic!

The other species are the capuchin or white face monkeys. These are shy, and rarely make any noise. Regardless of the species that you see, you will find they always travel in a troop. It is fun to see how baby monkeys cling to their mom as she swings over the treetops. They are literally holding on to dear life!

Of course, can explore more of the refuge if you wish. In one of the more remote areas far west of the Salado Barra you will find Thompsons Lagoon.  This area is rarely visited, and chances of seeing the wildlife icon of the area are enhanced. I am referring of course to the Antillean Manatee. However, these elusive creatures are mainly seen during their feeding time. Their eating habits are usually at dawn or dusk, which means that they are rarely seen during the day. But it is always fun to try to spot a manatee. Who know, you may be lucky enough to see one! So far, I have not yet had the luck. This is why I am seriously considering spending the night at the Cuero y Salado Wildlife Refuge