If you are out to find the most Honduran of foods, you will end up the traditional Honduran baleadas. You might not know it, but baleadas were born in Atlantida. Indeed, the first baleadas were served on the streets of La Ceiba! You will hear natives of San Pedro Sula claim that they invented the baleadas, but this is not true. In any case, it is agreed that baleadas originated in the north coast of Honduras, but are a favorite throughout the country. Central Americans all agree that the Baleadas are very much Honduran.

Regardless of where people claim that the first baleadas where served, it is documented that they were born in La Ceiba. These were served as street food that were both available and affordable to the dock workers. Remember, back at the turn of the century, the docks at La Ceiba where continuously loading ships with bananas for export. Back then, baleadas where wheat tortillas with beans. Their name came to be after some bank robbers got into a shooting with cops at the Banco Atlantida building. A loose bullet hit the lady who sold these tortillas. Fortunately, she survived, however the workers started going for their tortilla with beans to “la baleada” or the lady that had been shot. Soon the name stuck to the tortilla and they became the authentic Honduran baleadas! 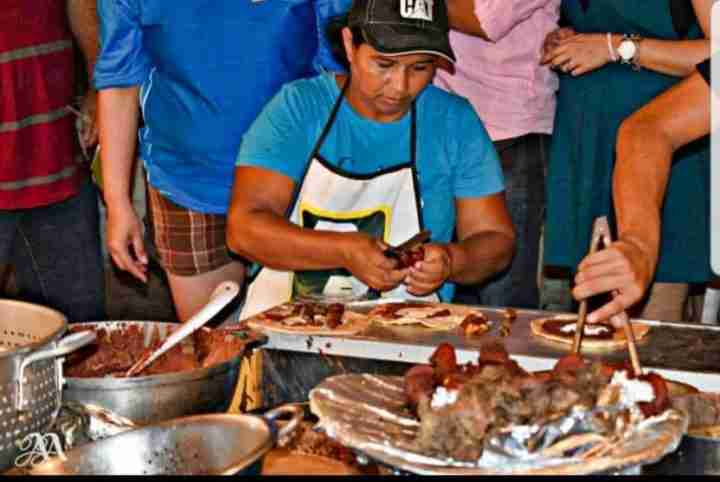 If you are Honduran or have visited this country before, you know what a Honduran baleada is all about. However, if you are still in the planning stage, or have just arrived, you will want this info! The Honduran baleadas have three basic ingredients. We start with a thin wheat tortilla. To this we add some beans which are usually mashed up and fried. Finally you add some cheese. With this, you know have a baleada that is ready to be eaten! However, a baleada can be much more sophisticated.

Baleadas become much more interesting when you add other elements. For breakfast, these are usually eggs, cream and avocado. For lunch or dinner, they usually add some meat. This can be chicken, pork or sausage. Of course avocado and cream are usually present. There are no specific rules to preparing a baleada as long as it has the three basic elements mentioned above. From there, feel free to be creative!

a delicious baleada ready to be served on a plate at eaten!

The next question you will have on your mind is where can I buy a Honduran baleada? Believe it or not, just about anywhere in Honduras. They have even been added to gourmet restaurants in upscale resorts, such as the Indura Beach and Golf Resort in Tela. However, baleadas are usually street food. As such, your best bet is to check out where there is a large group of people starting in front of a street food stall and order a baleada there. In La Ceiba, the most popular area to find baleadas is along the old railroad track that leads towards the dock.

The best and most popular stall is just off the Central Park in La Ceiba. Public opinion is that these are the best Honduran baleadas in town. The baleadas are always prepared to order. They usually have some piping hot tortilla that just came off the griddle and you can order yours with whatever additional ingredients you want. They even have a baleada assembly line

Of course, there are also baleadas in Tela. You will find them in the Bay Islands as well. Baleadas are the most popular fast food alternative for the working class. They are affordable, tasty and nourishing. Despite that fact that they are Street food, they are hygienic. The tortillas are cooked in the hot grill. The beans are in a cooking pan, and any meat or eggs are cooked in the hot grill, from there, they are served and are ready eat. Make sure you stop by Central Park in La Ceiba and taste a baleada. They are an important part of Honduras’ gastronomical heritage!